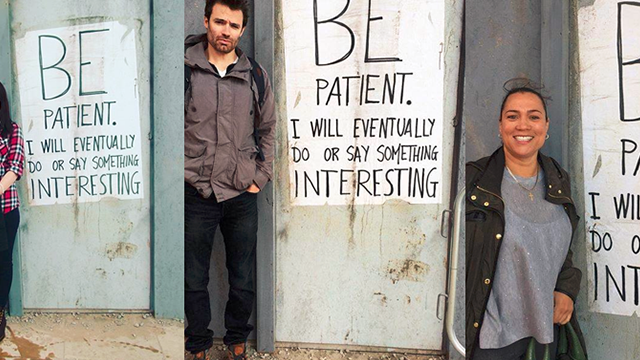 ‘Be Patient” at Banksy’s Dismaland

I honestly thought my first post would be something boring. Maybe a “hello, this is me” or “I don’t know what to write” or something like that. The truth is I do have something cool to open this blog. Let me tell you everything as it happened.

Three weeks ago I was enjoying my long-expected holidays in Italy when I received an email asking me to collaborate with a “big artists show” that would take place in the UK. They just wanted to add my “Be Patient” artwork to be shown in a wall. Some artists like Wasted Rita, Gilf! and Ian Stevenson would also join and I agreed. That was all. Once back in Berlin I wrote the guy who contacted me to follow up a  bit and also to tell him that in case my artwork was not included in that show I would be happy to collaborate in some others. Well, last wednesday he wrote me back to tell me that “that big show” was actually Banksy’s ‪ ‎Dismaland‬. Like really?? I wanted to believe it but it was simply too cool to be true. I told my boyfriend and my friends and then I decided to browse a bit Instagram – If it’s true somebody must have instagrammed it, I thought. AND IT WAS THERE! Several times even!

It’s amazing to see people posing with something you made in such a cool and important place (at least for me). Look at them!

I don’t even care (too much) about them thinking is something from Banksy (that’s is actually cool) but I have two key learnings of this experience:

1. Sign your work (it may be useful in the future)
2. I just realized that I eventually did something interesting. Being patient (and working a lot) has been rewarded.

Thanks a lot for reading this first entry and thanks everybody that support me.