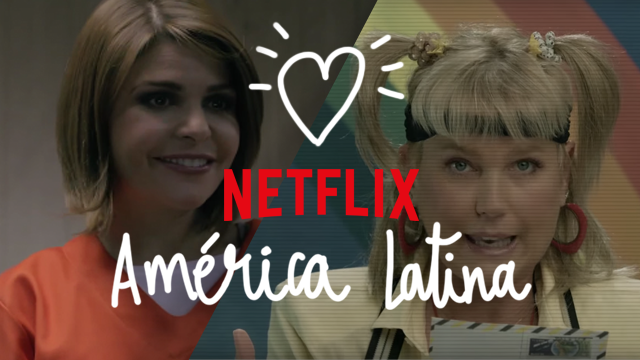 4 times Netflix América Latina won my heart with its marketing

Netflix Marketing: 5 promos that will win your heart

Netflix América Latina and Spain are winning a generation’s heart with a great content marketing strategy. By carefully selecting pop culture icons and celebrities they are generating a lot of buzz around their shows in the Spanish-speaking countries. I have gathered here for you the 5 times they absolutely won my heart. Let’s begin!

Netflix América Latina recently released a video featuring Brazilian artist Xuxa to promote their new original show Strange Things. For those who don’t know her, Xuxa is a television presenter and singer known by millions of kids that grew up in the 80s and 90s. She became popular outside Brazil thanks to her kid’s show on television and in the early 90s, she consolidated her career Latin America and Spain. That being said you may wonder what is the link between this woman and the new Netflix hit. Without a doubt, the answer is nostalgia. However you may call us: Millenials, Generation Y or Generation Next ( 😉 Move over yeah, don’t do it over) the truth is we are a nostalgic group of people. We are the ones that brought back Jurassic Park, The Ninja Turtles, The Ghostbusters and now The Craft (just to mention some examples). Yes, we miss those things, we want them back and the big studios know that.

Netflix is well aware of our nostalgia issues and decided to connect with a whole Latin American generation by using Xuxa. In the video, Eleven tunes the television into Xuxa’s kids show where she would read a letter from a mother asking for help to find her lost son (Stranger Things’ plot). Watch yourself.

My take: The fans of the show, children of the 80’s and 90’s would be pleased. The nonfans of the show of the same generation will probably feel curious. Everybody that knows Xuxa will take a look. They all will share it on several social channels and as a result everybody would say: Netflix is sooo cool! (or as we would say in Spain, Netflix mola!).

This is not the first time that Netflix tries to bring a pop-culture phenomenon back (at least within the Spanish-speaking countries).

To promote their new Spanish production, Las chicas del cable (The cable girls), Netflix Spain created a unique promo featuring five Spanish former representatives in the Eurovision Song Contest: Rosa, Edurne, Ruth Lorenzo, Soraya and Massiel. With a comedic tone and the singers making fun of themselves (only one of then won, and that was in 1968!) the situation simply works. The video could have been launched anytime before the Final. To give you a bit of context in case you are not European, the conversations both online and offline around Eurovision start months before the final in May. Of course, as we are approaching the Final the conversation increase in number and get more intense. But they took a bold decision… they will launch this while the Final is taking place, breaking into the global conversation. The promo cannot have more value now. I guess this was a hard decision to make but it was well handled and guys… I LOVED NETFLIX that moment.

On top of that, the cherry on top was to end the promo with the appearance of Mirela, a girl that never represented Spain in the song contest but all the “eurofans” (as we call ourselves) like and know. That was, dear friends, something remarkable. Eurovision is big in Spain and everybody new all the women in the promo BUT only the eurofans can possibly know and like that girl, Mirela, and understand why she’s there. That is a message for them saying hey, we made this for you eurofan! and it works magically.

Not long ago they released another promotional video for Orange is the new black featuring one of the biggest Mexican telenovelas villain: Soraya Montenegro (played by Itatí Cantoral). The telenovela was a big thing back in the days but some years ago a small – and crazy – cut was uploaded to Youtube becoming a viral almost immediately, bringing her from the past to the present, to the social media era. The promotional was again, brilliant.

This is the viral video that discover Soraya Montenegro to a new generation.

And this is her comeback for the promotion of Orange is the new black.

To promote this show, they also hit the nail on the head when they used another celebrity. This leads me to number 3.

Honestly, I didn’t know Moira before writing this article but after a quick look into her Wikipedia site, I learned that she is a super known celebrity in Argentina. In 2015 Moira was jailed (briefly) in Paraguay after her implication in a jewel robbery case. So Moira is an ex-inmate. So Moira was the perfect person to make this sketch. Today, Netflix won my heart again.

This one might be more controversial as we should assume that all latinos watch telenovelas and therefore that it is a good approach to “sell” a heavy and serious product like House of Cards to them. But I think is more simple than that: telenovelas are simply funnier and also one of the most copied television formats of all time. Telenovelas are a true cultural product from Latin America exported and proved successfully to the world for decades. It works. (Nobody asked my opinion about telenovelas but I thought it was a great moment to spit it out). Again, Netflix you won me.

BONUS: There is a 6th time my heart was won by Netflix and that is simply when they launched Strange Things (yasss) and even another time they broke my heart when they brought back Full House. In my opinion was totally unnecessary and the show didn’t meet anybody’s expectations. I guess that was also a lesson for Netflix: we don’t need to bring absolutely all the things Millennials miss; some things look better in our memories.

What do you think? Are you with me this time or you think everything I said is nonsense?  I’m really looking forward to see your comments on this!