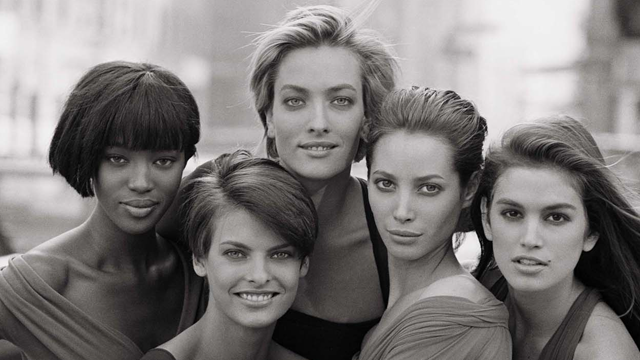 Supermodels of the 90's on Social Media

Supermodels of the 90’s on Social Media

They are the most known generation of models of all times but when the world was at their feet Facebook or Instagram were not even born. Brands, designers, fashion weeks and magazines had to fight to book them, they made movies and married movie stars, they were on the cover of Vogue, and at very young age they became global fashion icons that amassed great fortunes not only in the fashion industry but with their different business. Their names still evoking that great era – who doesn’t know who is Naomi Campbell, Claudia Schiffer or Cindy Crawford? – They are the 90’s! For my generation they have been everything, but maintaining that global influence among the next generations is not easy nowadays if you are not part of the Social Media. To survive or to fall into oblivion, that is the question.

I’m not a fashion expert myself but I do love the 90’s and I wanted to show you which of its fashion icons is doing better in the social media. I suggest you to read until the end of the list cause again, there is a big bonus track.

Naomi has built a strong media presence thanks to her scandals but also being a recurring face on television – she was jury of  The Face and had a role on TV shows such Empire or American Horror Story: Hotel.

Cindy was for several years the best paid model. As some other friends of the crew, she has maintained really active not only in the fashion business but also being spokesperson for several causes and charities. Her daughter Kaia Gerber has followed mom’s path and she is making herself a place in the business and I think is relevant to say that she already has +868K followers on her Instagram account – perks of being born in the social media era!

Smile, it’s Fashion Week! And this is as close as I will get to it. Bon courage! Thanks @wsjmag @everymomcounts

Christy has also maintained herself active not only in the fashion industry with numerous collaborations with magazines but also with her humanitarian activities that go from directing documentaries to launching non-profits and being ambassador for different causes.

Claudia holds a Guiness Record for being the model that appears in more magazine covers (more than 1000!). On 2007 she said the following in an interview: “In order to become a supermodel one must be on all the covers all over the world at the same time so that people can recognize the girls. That is, for now, not possible, not least because the advertising industry is very much taken nowadays by pop stars and actresses. Supermodels like we once were don’t exist any more.” I cannot agree more. Amen, Claudia!

Linda uttered what probably is the most famous quote on modeling history: “We don’t wake up for less than $10,000 a day.” She is also known for being part of the so-called “The Trinity” – Naomi, Christy and her. I think she remains in high demand nowadays and, according to Wikipedia, she is an activist for HIV/AIDS research and awareness, as well as for breast cancer research and awareness.

6. Tatjana Patitz and Helena Christensen are the less known of the group maybe and both seems to be only active on Instagram.

Even though they were part of the 90’s supermodel phenomenon, some didn’t belong to the group above. I’m talking about Elle Macpherson (+321K fans) and Kate Moss that has no official social media (crazy right?). Despite not having her own Instagram account, Kate Moss launched some days ago her own models/talents agency and in less than a week and with only 8 media posted, the account has gathered so far +535k followers. That is more crazy even.

As I promised, there is a bonus track in this list. Actually, 2 bonus tracks. I have included two supermodels that are normally not related to the 90’s ones: Tyra Banks and Heidi Klum. Tyra started to get popular after 1991 when she moved to Milan and Heidi was discovered in 1992 after winning a German modeling contest. By that time, Naomi or Cindy were already big supermodels but I wanted to include them somehow in this list cause they represent another era, an era not defined by any magazine or fashion journalist. What era is that? The Reality Show era. They are great models of course and they appeared on many covers but both gained popularity and power when they got their own reality shows. Magazine covers worked well for the models of the 90’s, but this supermodels built their influence thanks to their television presence and was that television presence that got them to the present, to the social media era. It’s not a surprise to see that they have much more followers than their 90’s mates.

After appearing in several TV shows like The Fresh Prince of Bel Air or Felicity, Tyra got her own reality show, America’s Next Top Model (which still on air) and the talk show The Tyra Banks Show. On both she was also executive producer. After attending to Harvard Business School she founded her own make up empire, Tyra Beauty, and she still being in the list of the world’s richest models.

Like Tyra, Heidi Klum was also a Victoria’s Secret angel and also like her, she got her own reality shows: Germany’s Next Top Model and Project Runway. She also became executive producer of both shows and launched successful collaborations with many brands – like make up and lingerie lines. Since 2013 she is also one of the judges of America’s Got Talent. Both Tyra and her have had similar and smart careers on television which have perpetuated a strong position in the celebrities ecosystem.

As you might have heard, size matters but is not everything. When it comes to social media we should also pay attention to the conversation generated, the buzz. Who is speaking about Naomi or Claudia on social? Well, it’s hard to be accurate here cause that would require an active listening with a powerful tool and access to a determined timeframe. In that case it could be interesting to know the times the terms “Naomi Campbell” or “#naomicampbell” for example were used on Twitter for example, so we know the volume of the conversation. It is not impossible to get that data for all times but it has a price and here I just wanted to see a quick sample so I have used a social media tool called Hashtracking to compare #naomicampbell and #katemoss. 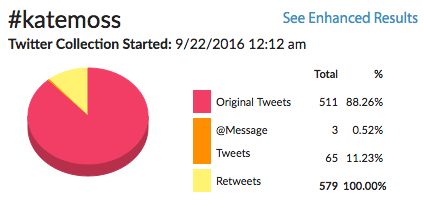 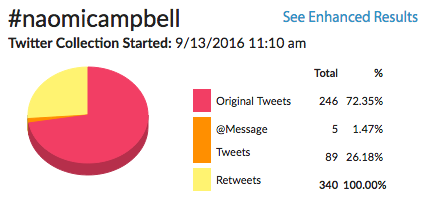 In the same period of time, people on Twitter talk more about Kate Moss than about Naomi Campbell. So Kate wins the conversation.

You could also make a quick search on Instagram to get the media generated with those hashtags. It is not the same I know, but still being a good addition to this post, don’t you think? So who is the most hashtagged 90’s model name on Instagram? For this ranking**, I have included Elle Macpherson and Kate Moss as well.

Interesting right? Kate Moss, who has no official social media channels leads on Twitter and Instagram by the number of media with her name and the conversations talking about her.

This post have made me reflect about the times we are living. Social Media have definitely shaken up and changed the world, that is certain but in which way? It has only changed our perception of what is a star, what is a supermodel? Or its implications are deeper than that? Has Social Media changed the fashion industry? And the television industry, the cinema, the technology industries? Is the same being famous than being influencial? Can a person be influencial without being a star?

I’m all ears guys! Thanks for reading and please, let me know what do you think on the comments below or on in Twitter.