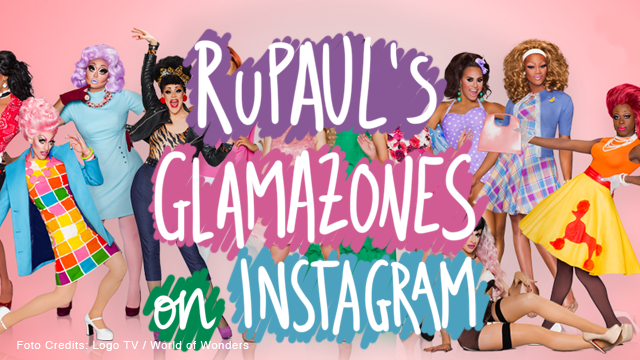 I love drags, I ❤️‍ RuPaul’s Drag Race and I love making lists so this post was another logical step for quite a while in my to-do’s list and finally I got some time to put it together. To give you a little background, I totally remember the first time I went to New York – towards the end of 2008 – and seeing a billboard in Times Square with RuPaul’s face announcing the show that would be first aired on February next year. I have seen many drag shows in Madrid, New York or Berlin but being on TV is something else – braver, clever and probably funnier.

Take these drag queens seriously, they are taking over the social media.

The format has been growing and growing in fans over the last years (including an Emmy award for Rupaul this year ?) and you can tell that not only by the people that know it and talk about it on television, at bars or at work but also by the amount of social media attention it generates. I can tell you already something: Take these drag queens seriously, they are taking over the social media.

Adore Delano (Season 6) has built a mega strong social media base but that is not due only to her participation on RuPauls but also because he was an American Idol contestant on 2008. She also has 459K subscribers on Youtube (with over 69 Million views on her channel according to Social Blade) and 257K followers on Twitter.

Originally Roy Haylock (Season 6), Bianca del Rio is the second biggest Instagram RuPaul’s drag. I think she is the one that is a professional comedian (a very good one).

The winner of the second season of RuPaul’s All Stars Drag Race, Alaska Thunderfuck (Season 5) is one of the most peculiar and original drags. (Like … Totally). The difference on followers with Bianca is only about 50K. She additionally adds 254K followers on her Youtube Channel and 369K on her Twitter.

Another shot for @queen.zine’s summer issue which will launch soon! Shot by @sanchezzalba Hair by @wigsandgrace Dress by @theladyhyde Make up by @sugarpill

Within the last year, Kimchi Chic, my favourite on Season 8, has doubled her Instagram fans. Kimchi is one of the most talented drags I’ve seen in the competition. You can tell when there is something more than a good look and her creativity was absolutely brilliant throughout the competition.

Violet Chachki (Season 7) belongs to a small group of queens in the show’s history to never have lip-synced for their life. She was invited to a Miu Miu party in Paris along with her BFF, Miss Fame, and Pearl and made clear that drag is to be taking seriously.

Katya Zamolodchikova, Katya Zamo or simply Katya (Season 7) is funny, trashy and witty as it can be.In one year, she has also doubled her Instagram following and she has alsgathereder quite an audience on Youtube with 122K subscribers.

Miss Fame has made herself room in the already crowded make-up tutorial world on Youtube gathering 482k subscribers on her Youtube and 25 Million views on her channel. Additionally, she has 129K on Twitter. She has also established a strong link with the fashion industry and walked the red carpet in Cannes with L’Oréal Paris.

Matt James or Pearl (Season 7) started the competition as one of the weakest but ended up being in the Top 3.

I’m sure you didn’t know that Sharon Needles (Season 4) has her own day in the calendar (at least in her hometown). Yes, that’s true, the Pittsburgh City Council issued an official proclamation declaring June 12, 2012, “Sharon Needles Day.

Smiling cuz my ass still fits this dress from 5 years ago. Wore it to my RDR premier with long bangs heavy powder head down walk fast no spook oh and BEATDOWN https://youtu.be/ZcIeBuy2EkE

Despite being the only RuPaul’s contestant disqualified Willam (Season 4) has had major success in the business after the show. Which business? He has a long career as an actor and after RuPaul he has proved to be a real entertainer.

Willam might be not the one with more followers on Instagram but it is definitely an authority on Youtube, where he has gathered +797K subscribers and + 151 Million views. ( :o) He also has 309K followers on Twitter.

While making this list I found out something small but interesting at the same time, a curious “pattern”. I originally wrote down the numbers of each one last Thursday with the idea of continuing the writing on Friday and out of pure curiosity I checked the numbers again and all changed: the biggest three (Adore, Bianca and Alaska) increased their fans by 4K in a day. The next four (Miss Fame, Kimchi, Pearl and Violet) plus Sharon Needles and Willam increased all by 1K followers and Katya increased by 3K. It might be silly but that could be announcing a trend. I did the same on Sunday and the trend continues. Katya has a lot of potential to grow much more rapidly than the rest and quickly be among the biggest four. If somebody is reading this please remind me to check again in three weeks to see how Katya has grown. 🙂 ALSO. We can agree on Adore Delano being the queen of Instagram but who rules on the entire social media is not that clear. What is more influential? Youtube or Instagram? Is Willam Belli more powerful then? What do you think? I think that’s all regarding RuPaul’s drags on Instagram. To conclude, I wanted to share a small reflection.

Variation September 2017 to October 2016 in the ranking

It is going to be interesting to check again in 6-12 months and see how much this has changed. Not only they positions will vary but we will definitely see how other queens of Season 8 like Bob the Drag Queen or Naomi Smalls and others from Season 9 like Sasha Velour, Shea Couleé or Valentina get a place in the ranking. And now, the extra bonus.

When I’m in drag I’m trying to exercise having an entitlement to the space that I’m in and commanding people to look at me. It’s powerful.

No. The quote is not my reflection (I would be a horrible drag myself!). Focus. Continue reading. After reviewing all the timelines and all the Wikipedia entries and go a little more in-depth with their loves, my idea of the DRAGS as ARTISTS and creators has been reinforced. I think that they embody attitude, entertainment, freedom and power. Last year I discovered in a Broadly article that there are women that also do drag, female drag queens or also called “Faux Queens”. As one of them put it: “When I’m in drag I’m trying to exercise having an entitlement to the space that I’m in and commanding people to look at me. It’s powerful”. I believe it is a topic that goes beyond the mere entertainment and cross borders to art, gender identity or fashion.

Condragulations! You made it until the end of the article and now is time to chat. What do you think? Do you like this topic? Feel curious? Do you drag yourself? 🙂 Will be Katya surpassing the rest soon? Are my calculations b.s.? Leave a comment below and/or on Twitter. Follow @villaraco